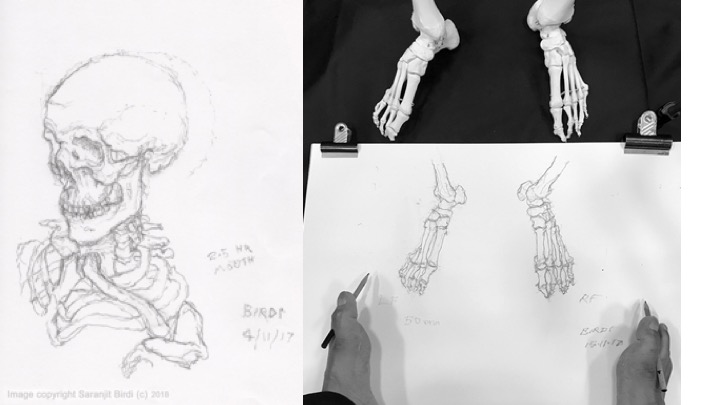 Saranjit Birdi is a multimedia visual artist and dance performer with a background in architecture. Born in Punjab, India in 1960, he has been a resident of Birmingham since 1973, and has studied and worked in Bristol and London. Parallel with his former profession as an architect, he played jazz percussion for jazz-fusion bands, taught and performed dance. Supported by the Arts Council of England, Saranjit’s research, since 2007, has also led to working in arts-in-health with disabled people in rehabilitation through drawing. This was followed by art-science collaborations with the University of Birmingham School of Bioscience on innovating learning methods, and the School of Psychology working with stroke survivors from 2011. His Performance, Mapping Bones - 3, will take place at 3pm in Saturday 16 February in The Drawing Centre Project Space, followed by a Drawing Discussion with Anita Taylor at 4pm that will focus on Saranjit's performance and his polydextrous drawing practice that explores the skeleton and the use of the whole body as a tool for drawing. Saranjit will also be running a Drawing Session, nokyorsoxoff, on Friday 15 February from 2-4pm.

Exhibition open during the events, and other opening hours will be confirmed shortly.