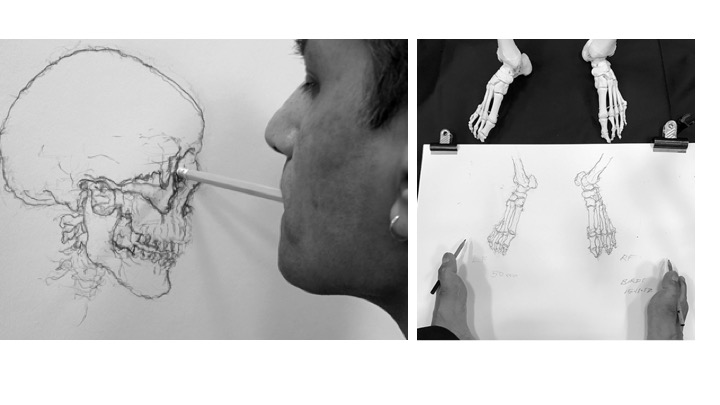 Drawing Projects UK is delighted to present this Drawing Discussion & Performance with Saranjit Birdi on Saturday 16 February 2019, from 3pm to 5pm.

The perfomance, Mapping Bones - 3, by Saranjit Birdi will take place at 3pm in The Drawing Centre Project Space, followed by the Drawing Discussion with Anita Taylor at 4pm that will focus on Saranjit's performance and his polydextrous drawing practice that explores the skeleton. As nationalism, migration, and border-crossing become major issues, Saranjit has turned his focus inward, exploring through drawing, music and poetry, a shared terrain, our skeleton.

Saranjit Birdi is a multimedia visual artist and dance performer with a background in architecture. Born in Punjab, India in 1960, he has been a resident of Birmingham since 1973, and has studied and worked in Bristol and London. Parallel with his former profession as an architect, he played jazz percussion for jazz-fusion bands, taught and performed dance.

Supported by the Arts Council of Engand, Saranjit’s research from 2007 has also led to working in arts-in-health with disabled people in rehabilitation through drawing. This was followed by art-science collaborations with the University of Birmingham School of Bioscience on innovating learning methods, and the School of Psychology working with stroke survivors from 2011. His awareness of being able to draw polydextrously began in 1997.

In 2016, Saranjit was awarded an International Artist Development Fund (British Council and Arts Council) to travel to Delhi, India and Dresden, Germany to disseminate his practice. He has held a number of exhibitions in the West Midlands - including at the Herbert Art Gallery in Coventry, Shire Hall Gallery in Stafford, and MAC Birmingham. He has several public art sculptures in Shropshire and West Midlands, and has been based in Eastside Studios in Digbeth, Birmingham since 2007. Presently, he teaches his course ‘Painting to Music’ at the Midlands Art Centre (MAC Birmingham), delivers workshops for disability groups, and instructs ‘fitness to music’ and wellbeing classes.

There will be a display in the Long Gallery at Drawing Projects UK of Saranjit Birdi's drawings from 15 February until Saturday 23 February 2019.

Miranda's Cafe at Drawing Projects UK will be open throughout the day serving refreshments.

Tickets for the Drawing Discussion and Performance may be booked by clicking here.