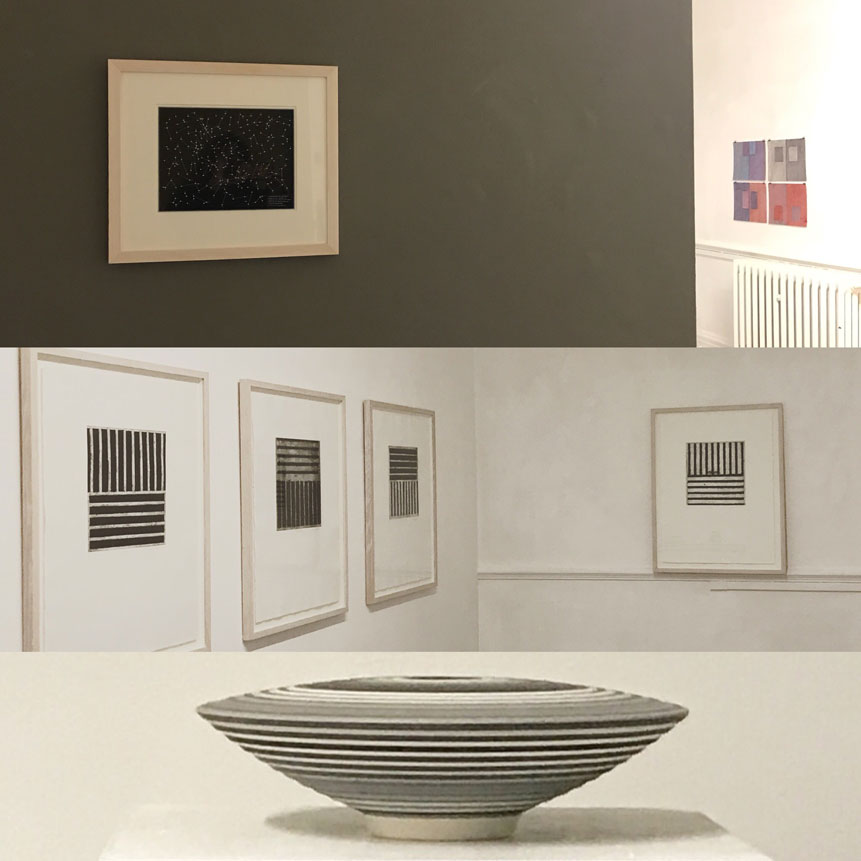 On show from 16 December 2017 to 3 February 2018, the exhibition, Line Up, features work by Jin Eui Kim, Gary Lawrence, Sandra Porter and Stephanie Syjuco. This collection of works use line as a principle element of the work, whether this is in ceramics, printmaking or drawing.

Jin Eui Kim is an internationally renowned ceramic artist. Originally from South Korea, he now lives with his family in Cardiff, UK. Whilst at Cardiff School of Art & Design Jin Eui studied the illusory effects of the application of tonal bands to three-dimensional surfaces. He graduated with a MA and PhD in Ceramics. Exploration with tonal effects and spatial illusions by using gradient in tone, width of bands and interval between bands is Jin Eui’s passion that results in works that are both visually and intellectually challenging and we are thrilled to be able to present a group of his OPjects. Jin Eui’s work has been exhibited widely, notably at ArtXchange in the USA, Galerie du Don in France, Lilly Zeligman Gallery in Netherland, Puls Contemporary Ceramics in Belgium, Contemporary Applied Art, Manchester Art Gallery, Scottish National Gallery of Modern Art, Yorkshire Sculpture Park, Ruthin Craft Centre, Oxford Ceramics Gallery, Dulwich Picture Gallery, Barbican Art Gallery, Museum of Modern Art in Wales, National Centre for Craft and Design, Mission Gallery, Bevere Gallery, National Glass Centre, Bluecoat Display Centre in the UK. He has been taking part in fairs nationally such as Ceramic Art London, Art in Clay, Art in Action, Oxford Ceramics Fair and internationally Oldenburg Ceramics Fair, AAF in Germany and Art Elysees in France. He took part in Collect 2015 at Saatchi Gallery with Ruthin Craft Centre. Industry and artistic recognition has led to selection for the AWARD exhibition in the British Ceramics Biennial in 2013, HOT ROOKIES special exhibition for the Gyeonggi International Ceramic Biennale in Korea. Manchester Art Gallery and The National Museum of Wales have both purchased his works for their permanent collections.

Sandra Porter RWA has just completed a six-month residency at Drawing Projects UK supported by a Grant for the Arts from Arts Council England, and with further support from The Iona Foundation in Amsterdam she has created a new and powerful body of drawings, paintings, and prints for her forthcoming solo exhibition at Stroud Museum in the Park. Sandra Porter has exhibited widely in the UK, in Europe, the USA and, most recently, in Brazil; and her work is held in numerous private and public collections, including the Government Art Collection, University of Bath, University of Pelotas, the Tate and V&A Libraries. Inspired by architectural structures, Sandra Porter has consistently sought out those that correlate to her enduring aesthetic. The initial starting point for this project, corrugated iron dwellings found on the Isle of Skye, fulfilled her pictorial fascination with flat planes, shallow form, linear rhythm, lapped edges, layered surfaces, apertures. Exploring playful visual connections and the formal properties of these points of reference, the sheer enjoyment of Sandra Porter’s work in piecing together a constructed world - layered, lapped, abutted, conjoined - is apparent. From experimental drawings to the construction of the extended landscape format prints and large paintings, the images are resolutely made in panels, sections and segments; this act of conjoining and piecing together the parts would seem not just a literal, but metaphoric, act of making a new whole. A measured and purposeful restoration of equilibrium and balance. The Spirit Level series of prints are dramatic in their tonal contrast, while the new drawings are delicately nuanced in shift and change in colour, light, mark and surface.

Stephanie Syjuco creates large-scale spectacles of collected cultural objects, cumulative archives, and temporary vending installations, often with an active public component that invites viewers to directly participate as producers or distributors. Using critical wit and collaborative co-creation, her projects leverage open-source systems, shareware logic, and flows of capital, in order to investigate issues of economies and empire. This has included starting a global collaborative project with crochet crafters to counterfeit high-end consumer goods, presenting parasitic art counterfeiting events, and developing alternative vending economies, and other speculative propositions. Upcoming exhibitions include New Photography: Being at the Museum of Modern Art, New York (March 2018) and Public Knowledge at the San Francisco Museum of Modern Art (2018). Born in the Philippines, Syjuco received her MFA from Stanford University and BFA from the San Francisco Art Institute. She is the recipient of a 2014 Guggenheim Fellowship Award and a 2009 Joan Mitchell Painters and Sculptors Award. Her work has been shown nationally and internationally, and included in exhibitions at MoMA/P.S.1, the Whitney Museum of American Art, The San Francisco Museum of Modern Art, ZKM Center for Art and Technology, the California Biennial at the Orange County Museum of Art, The 12th Havana Bienal, The 2015 Asian Art Biennial (Taiwan), among others. A long-time educator, she has taught at Stanford University, The California College of the Arts, The San Francisco Art Institute, Carnegie Mellon University, and is currently an Assistant Professor in Sculpture at the University of California at Berkeley. She lives and works in Oakland, California.