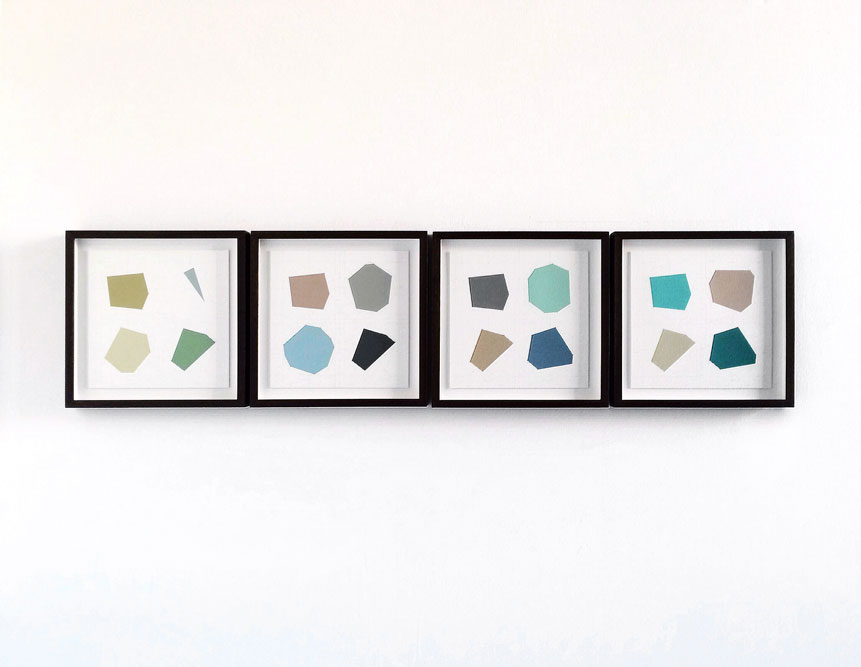 From 5 May - 30 June 2018, Drawing Projects UK presents the exhibition, From the Ground - Mandy Bonnell & James Brooks, which includes drawings and an artist’s book by Mandy Bonnell made in response to Eloise Butler's Wildflower Garden in Minneapolis, and drawings and paintings by James Brooks that explore the geography and geometry of civic spaces in towns and cities across Europe. The common ground between the two artists is the exploration of geography and place, along with an intimacy and delicacy of mark-making.

Eloise Butler's Wildflower Garden was produced in response to the first public wildflower garden in the USA founded by Butler in 1907 in Minneapolis, and the three concertina sections - Flora, Flower and Fleuron - will be fully displayed for the first time. A wall drawing by James Brooks, Geometry of Travel, Minnesota, USA [2018] responds to this botanist project and relates to his Geometry of Travel tourist postcards series, seven of which are displayed, simply propped, on the gallery mantlepiece in the exhibition and feature Athens, Bath, Capri, Florence, London, Monte Carlo and Paris.

Mandy Bonnell [b.1957, UK] and trained at Gloucestershire College of Art and the Royal College of Art, where she attained an MA in Printmaking in 1983. She specialises in drawing and print, and in the early 1990’s helped establish a self-sustaining print workshop in Lamu, Kenya, with the support of the British Council. For the last seven years she has researched traditions in botanicals and herbariums whilst on various residencies in the USA, at the Albers Foundation in 2009 and 2014, and the Minnesota Center for Book Arts in 2013. Her unique boxed collections of drawings, collages and botanical samples, and editioned artist’s books, were featured in a major exhibition Of Green Leaf Bird and Flower at the Yale Center for British Art in 2014. Mandy Bonnell has held 14 solo exhibitions to date, including at the RaMoma, Museum of Modern Art, Nairobi and four shows with the Eagle Gallery in London. Her work is held in many public collections including Ashmoleum Museum, Oxford; British Council, Kenya; British High Commission, Nairobi; British Library: Modern British Collections; Berry and Coutts Co., London; Fidelity, London; Fitch and Co., London; RaMoma, Museum of Modern Art, Kenya; Victoria and Albert Museum, London; and the Yale Center for British Art.

James Brooks [b.1974, Devon UK] studied at Exeter School of Art and then Chelsea College of Art in London, where he attained an MA in Fine Art in 2004. He has received a number of travel awards, including from the British Council to travel to Shanghai in 2016 and to Frankfurt in 2002. James Brooks gathers information about places and the journeys undertaken - including weather reports, predictive information, mapping and topography, place names, graphics and book design, historical and literary references, and from observation and experience. He distils and transforms this source material through drawing, geometry and the language of abstraction to filter, to re-interpret and to form new visual equivalents to these experiences of place and travel. Since completing his MA in Fine Art at Chelsea College of Art, James Brooks has exhibited widely, both in the UK and internationally. His work is held in collections including The University of Arts London, Thaddaeus Ropac, The Gottesman Collection and David Roberts Arts Foundation. He lives and works in London.