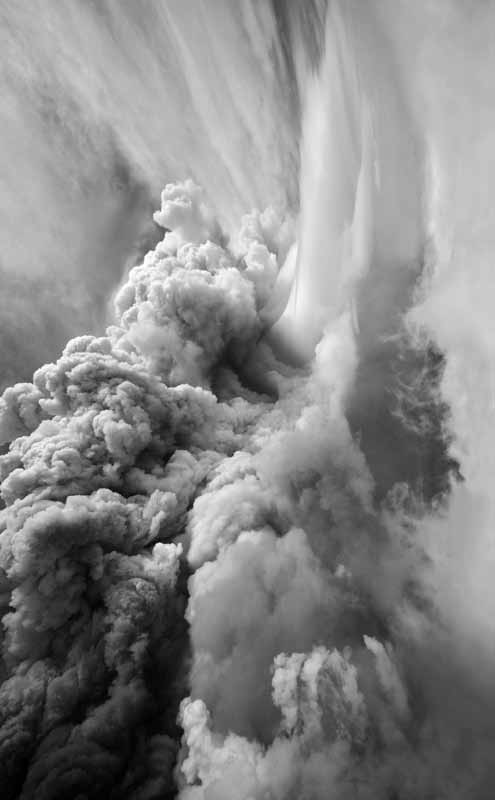 The Greyscale  exhibition explores the role of grey and grey-ness through drawings, digital media, photographs, mixed media. Grey, with its significant cultural and scientific properties and relationship to colour theory are explored though a variety of graphic means. In her essay for the exhibition catalogue, Dr Donna West Brett [University of Sydney] says:

‘Grey is used here to rework how we perceive matter, how we embody place, the ways in which we encounter, remember or retrace time and remnants of existence. It is also fundamental for the possibilities of recording the world through the intricate materialities of graphite, felt, paint and photography or lava and ash.’

Peter Burgess’ work focusses on the negotiation of relationships between private and public levels of experience, where found objects and images are each recognised for the potential of their individual narrative. Objects and experiences that are normally taken for granted - a parcel tied with string, an old photograph, even language itself - are re-arranged, re-packaged or re-contextualised to take on new meanings. Peter Burgess studied Architecture at NSW Institute of Technology before studying Art and Education at Alexander Mackie College of Advanced Education. He received his Master of Fine Arts from Pratt institute in New York in 1981. He has had numerous solo shows, and exhibited extensively in group shows, in Australia, North America and Europe. His works are held in a number of collections including the Australian National Gallery, Museum of Contemporary Art Australia, Tasmanian Museum and Art Gallery; New Museum of Contemporary Art, NYC.

Julia Davis works with a wide range of materials and processes including object, photography and video. Her installations are often site-specific and have been installed in salt lakes, deserts, parklands, as wells in galleries and the built environment. Working in active landscapes such as deserts, volcanic areas or salt lakes, Davis spends long periods interacting with the location and accumulating data and materials. Here, grey is represented in a photograph of a turbulent volcanic event, with the ash forming the grey tonal range of the image, next to this hangs a plastic sheet into which lava and ash has been physically ground, forming a trace of the event. Julia Davis has an MVA from Sydney College of the Arts, University of Sydney and exhibits nationally and internationally and is the recipient of numerous awards, including the Australia Council Residency at the British School at Rome. Her work is represented in private collections in Australia and Europe.

Adrian Gebers takes the greyscale, in the form of a standard reference card used by photographers and designers to measure colour, and re-presents it as a large graphite wall drawing, behind which is a grey painted wall. The colour of the wall is drawn from the process of a paint company’s camera, which is designed to recreate reality as accurately as possible. The installed work explores the inherent visual schism between the technologies used in depicting or representing the greyscale. Adrian Gebers is an artist and writer and from 2010-2013 was Co-Director of Peloton, a Sydney ARI (Artist Run Initiative). His research focuses on the structures through which meaning is made and the particular history of Sydney’s art world.

Pollyxenia Joannou's contribution to the exhibition is through a series of grey, tonal works that intertwine elements of drawing and painting, using materials such as acrylic paint, conté crayon and felt, to reflect upon migratory history and its remnant traces in the urban landscape. She studied art at East Sydney Technical College and City Art institute, UNSW, and has a Masters in Communication Design from St Martins School of Art and Design in London. Pollyxenia Joannou has exhibited in group and solo shows in Australia, Europe and the UK; and her work is represented in the collections of ArtBank, Art Gallery of New South Wales and the University of Sydney.

Lisa Jones makes work that take the form of mapping, both cartographic and cultural, resulting in drawings and sculptures that reinterpret human and made systems such as transport lines, bodily organs or cracks in pavements, are symbolic of dislocation, order and chaos, history and time. Her work explores drawing, sculpture and video, and she has exhibited nationally and internationally in individual and collaborative projects. Her drawings have been acquired by the Jacaranda Acquisitive Drawing Prize and Macquarie University Art Gallery.

The opening event takes place on Thursday 6 April from 5pm to 8pm in association with Explore Art in Trowbridge. There will also be a Drawing Session on Saturday 8 April led by Julia Davis and Lisa Jones and a free Gallery Talk on Saturday 8 April with Peter Burgess, Julia Davis, Lisa Jones. Please contact us for opening times over the Easter period.