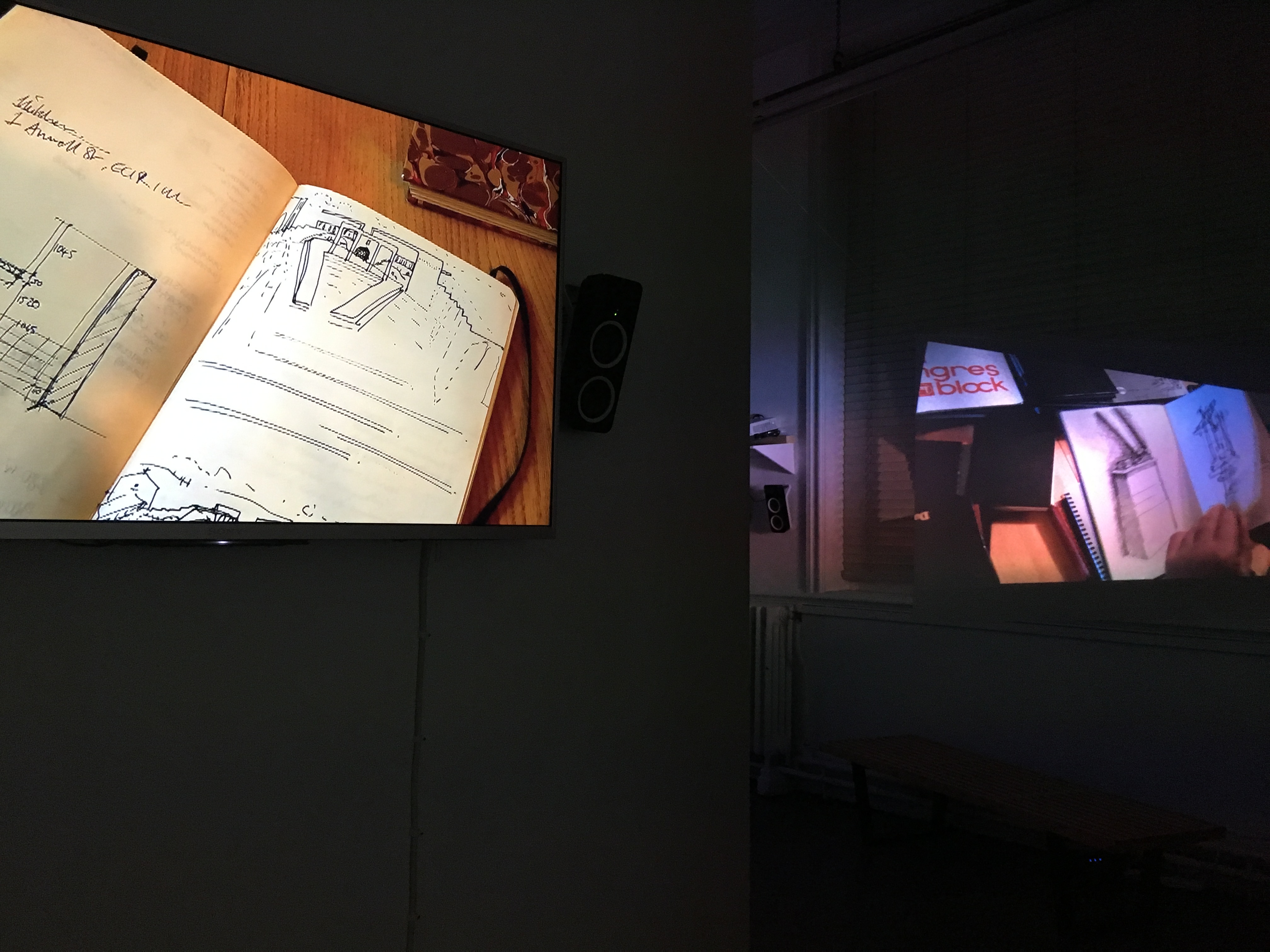 The exhibition, Sketchbooks: An Obsession, explores and presents sketchbooks used by contemporary artists and has been developed from a research project undertaken by Alaluusua that involved in-depth interviews with a number of artists and sketchbook users. A video installation exposes sketchbook pages on screens and projections and the stories of the interviewed artists blend into one another as their voices are heard talking about their sketchbook practices. Featuring extracts from interviews with artists Stephen Farthing, Dennis Gilbert, Nigel Hall, Eileen Hogan, Anne Howeson, Michel Sandle and architect Naomi Shaw, the installation draws the viewer into the compelling world of sketchbooks.

Elisa Alaluusua originates from Finnish Lapland and has been exhibiting internationally since the early 1990s. in 2015, she won second prize in the prestigious Jerwood Drawing Prize with her video/drawing Unconditional Line. Alaluusua lives and works in London and regularly visits the reindeer farm where she grew up in Lapland.

The exhibition will be open to the public Thursday to Saturday from 10am-4pm from 9 February to 4 March 2017.  A special event will take place on Saturday 4 March at 4pm, the Drawing Discussion: On Sketchbooks with Nigel Hall RA, Michael Sandle RA and Anita Taylor with Elisa Alaluusua will explore the role of sketchbooks in their practice. Booking is essential for this free event via this link.

Sketchbooks: An Obsession is kindly supported by The Finnish Institute in London. The exhibition was featured as a 'must see' exhibition of the week by a-n and was featured as 'pick of the week' by Megan Dunford for Visual Arts South West. You can also read more about Elisa Alaluusua's project in Interalia Magazine.

Extract from the exhibition text, by Elisa Alaluusua:

Sketchbooks are multipurpose tools and spaces for recording. They can be seen as books about life. For their keeper, sketchbooks often are a constant companion and a greatly valued travelling companion. It has been said, that sketchbooks reveal the artist’s thinking on the pages. A sketchbook can act as a repository of feelings. Perhaps sketchbooks cover an obsession. In many cases artists identify sketchbooks as an aid to memory, a storage space, and a communication tool. Artists, and other creative people, develop a personal approach with sketchbooks in a manner most useful for themselves. Their way of using sketchbooks is practical and purposeful even if sometimes sketchbooks are used as a space for doing ‘nothing’ in them. It can also be a space for ‘not knowing’ and as such it serves a purpose identified as important by many of the artists interviewed for this exhibition.

This body of work was created during an artistic practice-based research project conducted between 2009-2016 mainly in London and in Helsinki, Finland. Contemporary artists and sketchbook experts were interviewed about their sketchbook practises and during this engagement a discovery was made that allowed access to sketchbooks in a new, revealing way. The fact that the interviews were conducted by another practicing artist and a fellow sketchbook keeper, rather than a crew of people with extra lights and fancy equipment, allowed a dialogue to develop between the artists and, perhaps more importantly, a dialogue developed between the sketchbook keeper and their sketchbooks. This reflective talk was captured in video recordings and later turned into pieces of work included in the current installation. The artists interviewed opened up their sketchbook pages and shared their thoughts about sketchbooks.

Stephen Farthing, who is a painter with a special interest in drawing, sees sketchbooks as practical tools. He sees them as “extremely useful” but they are not “precious” for him. Farthing describes drawing as a distillation process where things that are important, the salient parts, are recorded – so when working in his sketchbooks Farthing is using a selection process: “it is not getting down everything, it is getting down what you think is important”.

Dennis Gilbert says that he has always used sketchbooks. At the time of the interview Gilbert had already celebrated his 90th birthday. Despite his age, Gilbert still works as a painter. He describes his way of working in sketchbooks as haphazard – he might pick up an old sketchbook and carry on working in it if there are blank pages left. Gilbert does not identify any particular method with his sketchbooks but draws anything he finds interesting.

Nigel Hall is a sculptor and a draughtsman with a regular sketchbook habit. Many of his sculptures as well as his large-scale drawings consist of circular or elliptic forms; often they have a curved linear presence. In Hall’s 2011 Artists’ Laboratory exhibition at the Royal Academy some of his sketchbooks were exhibited in vitrines. The sketchbooks are an essential part of Hall’s practice as he is developing ideas for his sculptures and drawings.

Eileen Hogan is a painter who uses sketchbooks regularly. She has a collection of them including the earliest sketchbooks she would have worked on as a child because her mother kept them. Sharing sketchbooks is not straightforward for Hogan, even though she had agreed to do so – and had already exhibited chosen sketchbook pages either in exhibitions or in digital format. Hogan sees her sketchbooks as a private area where she can document things around her.

Anne Howeson is a painter who started using sketchbooks when she “first fell in love with the idea of art and becoming an artist, at the age of about twelve”. In her early sketchbooks there are drawings “taken from a mixture of life”: things she saw in magazines, people on the bus, family members, their dog, friends, teachers, self-portraits. For Howeson drawing in the sketchbook became something that kept her company.

Naomi Shaw is an architect who encourages her architecture students to keep sketchbooks. “I think it has taken me a long time to start using sketchbooks that are really useful for me in the work I do now.” The drawings in her sketchbooks bring back a lot of memories. Shaw acknowledges that for her, sketchbooks are a “chronological thing” and that she now enjoys more than ever just filling her sketchbook with “whatever is happening next… whether it’s a visit, a piece of work or an observation or a piece of research”.

Michael Sandle says that he is an artist who does sculpture. He started his career as a printmaker and that shows in his drawings – they are almost hacked on the pages. Sandle mainly works from imagination and memory but there are some drawings from observation, including ones made after the sculpture was completed – because it is hard to let go “if you spend years on something”, as Sandle points out.