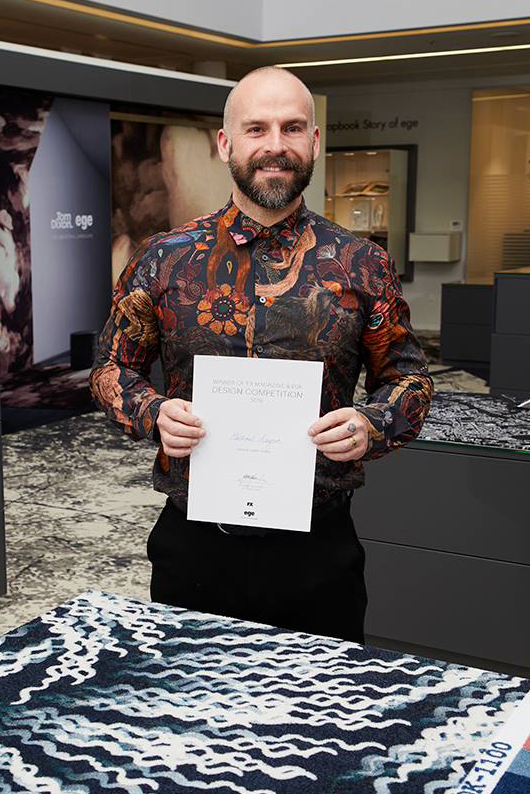 Join us for our first Makers Talk with designer, Michael Angove, on Saturday 10 August at 3pm.

Michael Angove is a British designer who grew up in the Vale of Glamorgan in Wales. He spent his early years in the quintessentially, coastal town of Barry. It's Victorian gardens, fallow grounds, derelict buildings and sprawling docklands are all icons of tired beach towns, but Michael was hugely inspired by how nature thrived in these environments. Disused buildings were bustling with mosses, little ferns, birds’ nests and Buddleia shrubs. Whilst the teasel-edged, dark waters of the dockland were home to lonely jelly fish and dragon flies.

This unusual source of inspiration has formed a unique and personal approach to design. Michael looks at every project as an exploration, bringing attention to hidden details and the beauty of the unusual. Complex patterns are richly layered with every aspect of plant life, from summer dust and pollen to broken stems and billowing flower heads. They are a fantasy of flora and fauna, capturing a perfect, bursting-with-life moment. Unexpected ingredients are a signature trademark in Michael’s designs. Earth, soil, fire, crystals and water make an appearance in his latest collections and it is the inclusion of hidden insects and animals that capture the imagination. Alongside complexity, Michael has a great sense of simplicity and minimalism as an antithesis to the chimera of the chinoiserie. He is an award winning fine artist whose work is clean, shear and cerebral. Focusing on space and quality of line, his drawings have been described as ‘haunting’. Michael has a long-standing love of Scandinavia and has travelled to Norway, Sweden, Denmark and Finland seeking an insight into how heritage and story has inspired very contemporary design. The Scandinavian appreciation of light and colour and the decorative tendencies of his other country of interest, Japan, can be seen in his craft.

Michael undertook his first degree at Winchester School of Art, where he gained several awards from Sanderson, Marks & Spencer and the RSA for his hand-drawn designs. This led to his acceptance to the Royal College of Art where he learnt about style, complexity and bravery. After his Masters degree, Michael went on to work for Jean Paul Gaultier, Hugo Boss and Antonio Marras while based in Italy. Soon upon his return to Britain his talent was spotted by Liberty with whom he made several fabric ranges.

Held in association with the new Trowbridge Weavers Market, an artisan market held in the county town of Trowbridge on the second Saturday of the month, the series aims to provide an in depth focus on the creative practice and motivations of influential makers and designers in the UK.

Advance booking is highly recommended, and tickets can be booked here.