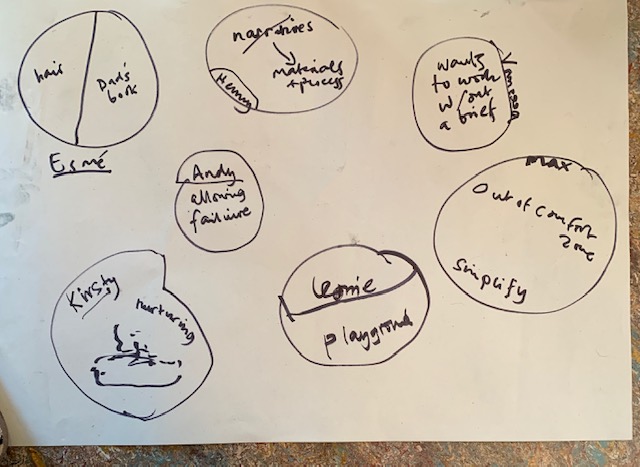 Here’s a question, what aspect of your practice might you develop using drawing? (If you find it hard to answer substitute the word develop for the word explore.)

I’ve learnt that for some – myself included - even post MA, the rigour necessary to answer questions like this is more easily found in a group where the people around you will contribute to the energy levels and the depth and structure of a discussion.

Last summer I put together a group of artists, all of whom were interested in drawing and the question of their own CPD. We agreed to meet one day a month at Drawing Projects UK for four months. The venue was important, lending professionality and a sense of serious endeavour.

Initially we had to explore what contemporary drawing might include by doing more and more boundary testing. Is a piece of cord tied to several objects including oneself a drawing? Is this spill of charcoal a drawing? And that torn edge?

Our first collaboration filled the room: involving all the furniture, tape, paper and charcoal. It was a cross between a playground and a den. We decided it was a legit’ drawing. There was no conventional beauty in it and some of us found the mess discomforting, a fact we couldn’t discuss openly because we hadn’t yet established trust levels in the group. Simultaneously we had been testing one another’s boundaries: which of us is comfortable with the apparent chaos (lack of reason) and who finds it distressing?

Over the sessions which followed we took turns to set the agenda working on one person’s question at a time, inspired by a personal sticking point or area of growing interest, informed by intuition. Sharing these things with the group was a matter of trust. Here are some of the things individuals brought to the group for exploration or development: performative drawing and the group as one body; failure and our value systems; drawing to transform found printed matter and ownership; drawings on and in plaster/3D drawing; how different genres of music affect a group doing improvised mark-making.

After each project we stopped briefly to discuss how we felt about the drawings we had done. Yet immediately following the intense drawing session, we were always tired with the effort of deep concentration. We held an extended, reflective discussion in the fourth session, based on the idea that ‘As Time Went On You Began to Fail Better’ with the aim to look at our relationships with both creative failure and success. Would we have benefitted from having structured this discussion more heavily, post or prior to the moment it was created? Or did the distance allow a more considered discussion? These are questions we will keep asking ourselves and each other.

There were probably an infinite number of ideas we could have explored. In the final session we were doing seemingly absurd exercises we could not have attempted in the first session as we had begun to trust and cohere. In other words, we had begun to transition towards being a research group.

Speaking for myself, I have always wanted to have access to ‘a drawing-based research group’ although I can quite see that for many others an artist’s practice is a private affair. I don’t see it that way. There are times when I have to make alone but I enjoy seeing what another person’s intellect and imagination brings to the table and I LOVE making alongside other people. It’s a celebration of shared values. Like having the same faith maybe.

The group will carry on meeting, with a month off in February. If you want to talk about putting a similar group together, get in touch (Instagram: emmagregorymakes). 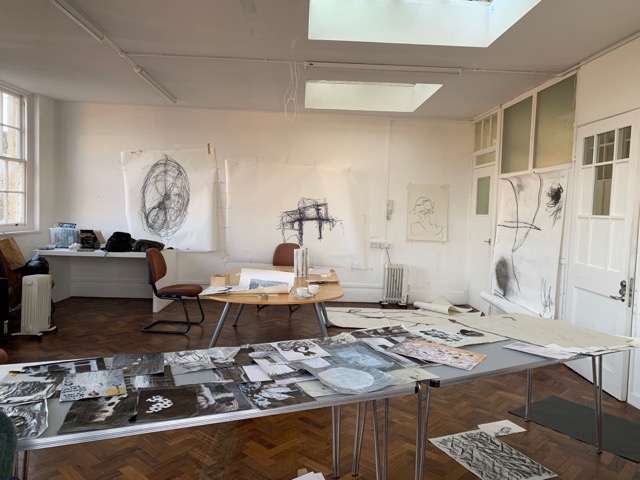 Please note that we have postponed the Drawing Matters exhibition and preview and will confirm the new dates for the exhibition soon. Drawing Projects UK is delighted to present the exhibition, Drawing Matter - Eleanor Bartlett, Lucinda Burgess, Carole Pearson - new dates will be confirmed soon.  Eleanor Bartlett, Lucinda Burgess and Carole Pearson all emphasise the nature and character of different... Drawing Projects UK has 10 self-contained studios and workspaces. All of our spaces are located on the ground floor of Bridge House, have excellent natural light, and are generous in height with central heating, wifi and a common utility room. Studio 10 will be coming available in April 2020 as our current tenant is relocating. Please contact us by email... Winners of the Trinity Buoy Wharf Drawing Prize 2019 were announced on Wednesday 25 September 2019 at the Awards Ceremony and Launch of the 2019 Exhibition at Trinity Buoy Wharf in London – with prizes of £27,000 in total value. Chosen by selectors Chantal Joffe RA, Andrew Nairne OBE and Professor Dorothy Price, the First Prize of £8,000 was awarded to Alice Motte-Muñoz for her drawing, Reverie. Shelly Tregoning was awarded the Second Prize...